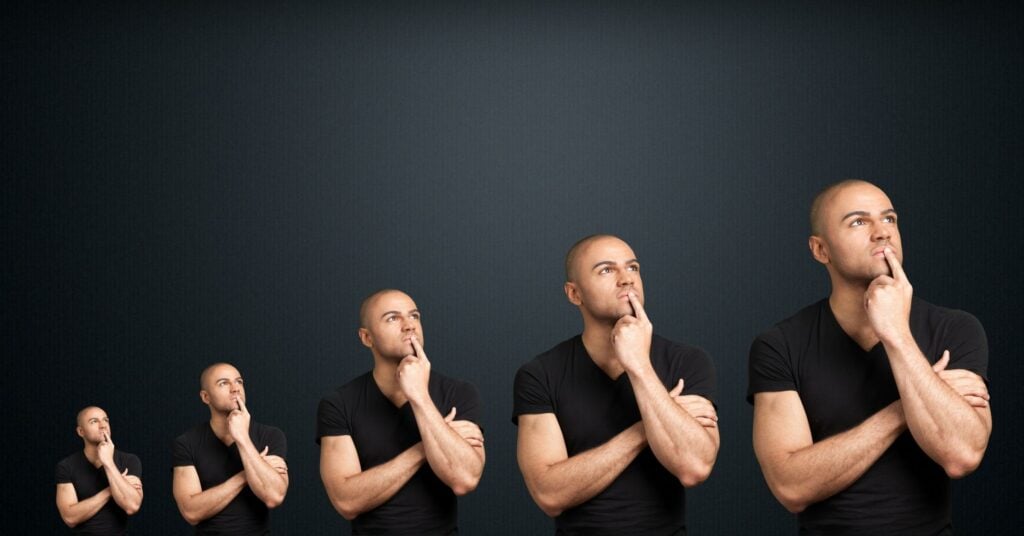 Change your perspective on your problems, doubts, or worries to make them look smaller.

Question: How big is your biggest problem?

Now, let’s look at a picture of a tiny slice of the known universe: 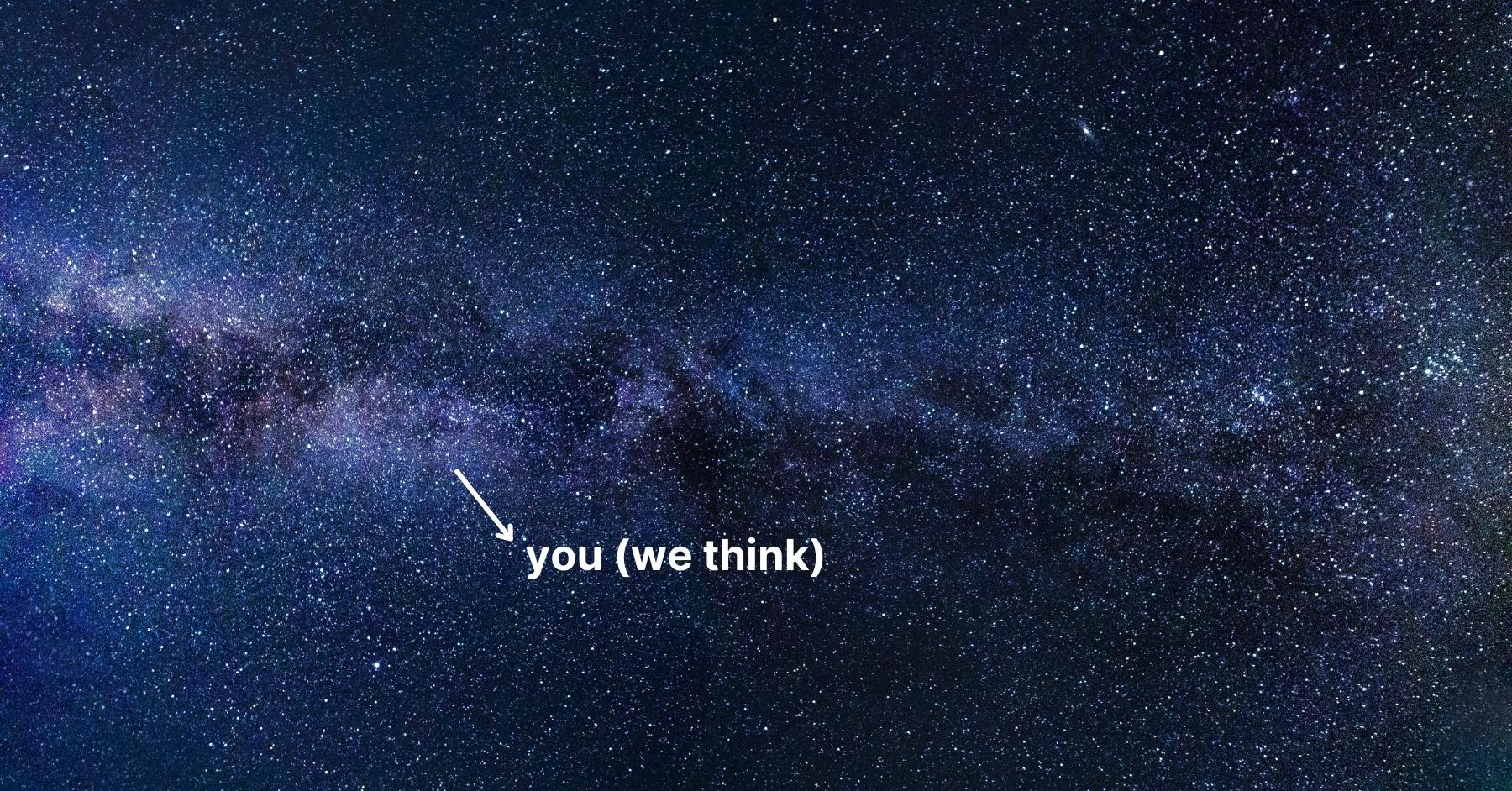 Everything you’ve ever done, everyone who’s ever lived, and every problem you’ve ever had took place on that almost invisible dot somewhere in the universe.

How big does your biggest problem look now?

A bit smaller, no?

Cognitive reframing is a mental technique that can be used to look at a problem, event, or situation from a different viewpoint, and thus perceive it differently than before.

Let’s take another example. Let’s say the blue circle below represents your problem. In which figure does your problem look smaller? 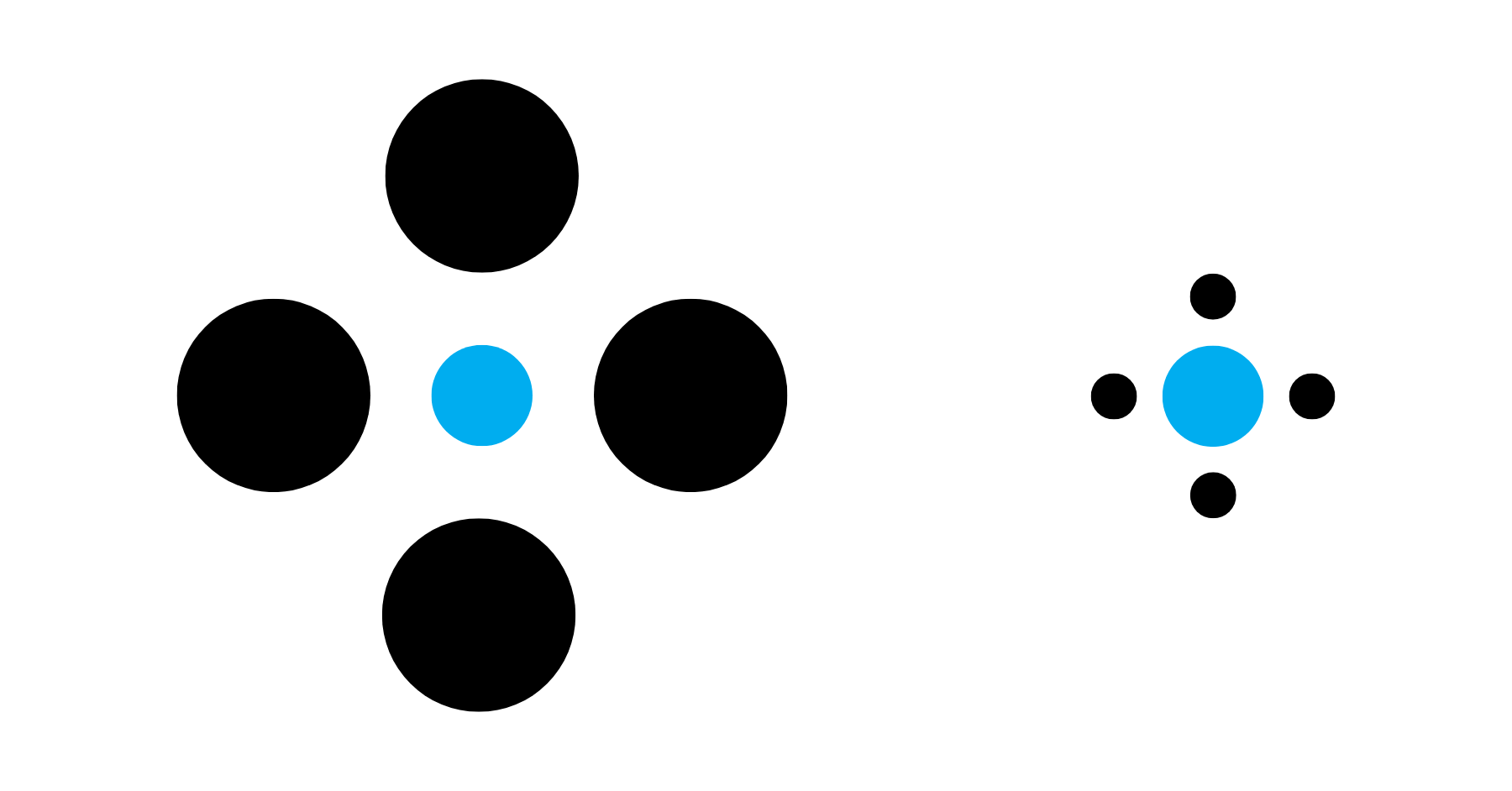 You probably chose the image on the left, correct? If you have bigger issues to deal with, your current challenge will seem smaller in comparison.

Of course, both blue circles are exactly the same size, but they don’t look that way because perspective really influences how you perceive things.

Your mind does not perceive the world objectively, but from your own unique perspective. Your brain is prone to mental biases that can distort the way you look at things.

Here’s another illustration. Let’s say in the picture below, the hand represents the problem you are facing, and the face represents your point of view: 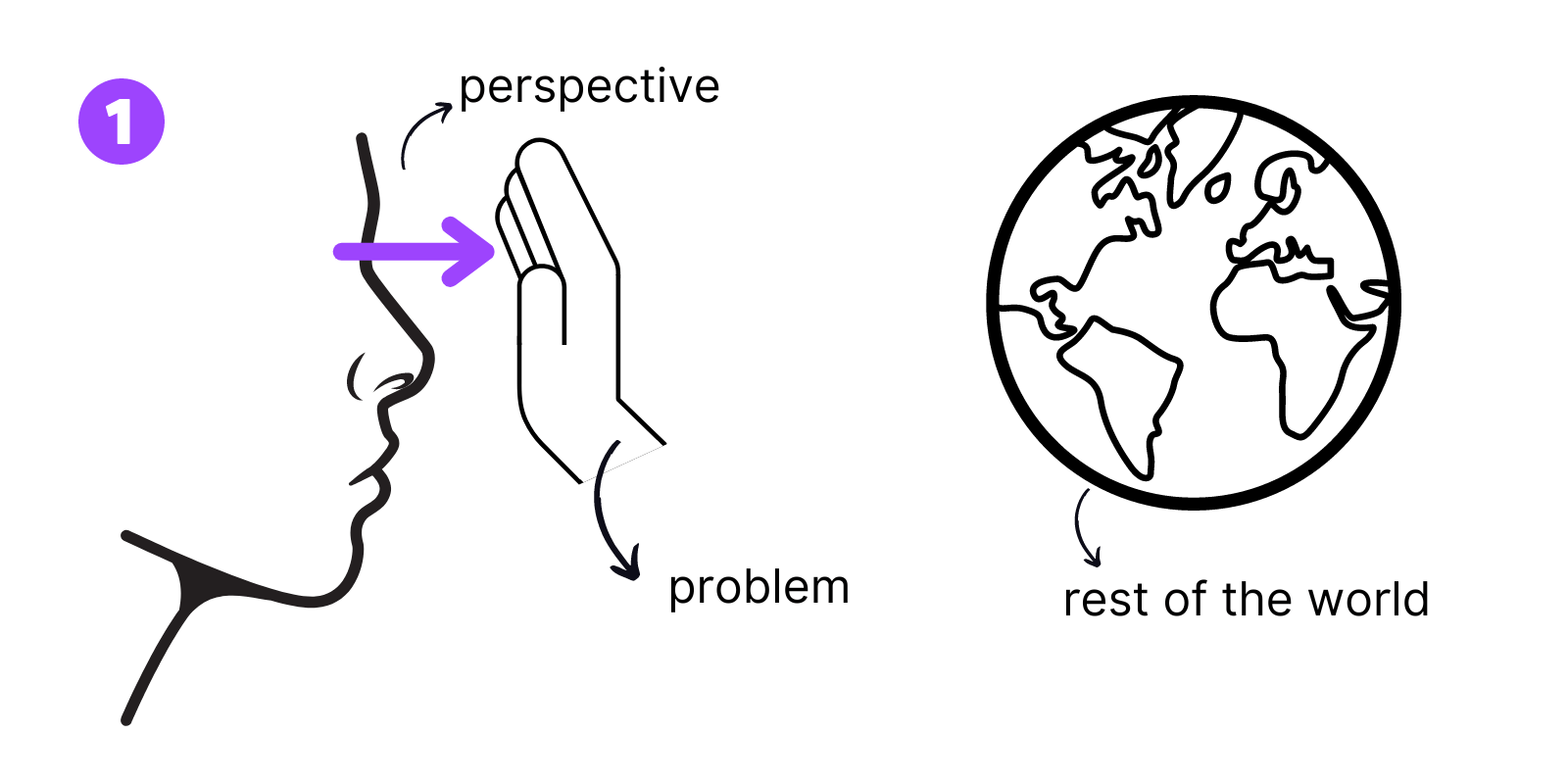 When your problem is in your face, your perspective (literal meaning: “the appearance to the eye of objects in respect to their relative distance and positions” – Merriam-Webster dictionary) is very narrow, and you can’t see anything else but the problem.

You can’t even see the rest of the world because your problem seems so big that it blocks your entire vision!

Even if you turn your head sideways, the hand turns with it. Your problem seems to follow you everywhere you look.

After realizing what you are doing, you finally take a few steps back in an attempt to create some space between you and your problem. You now face this situation: 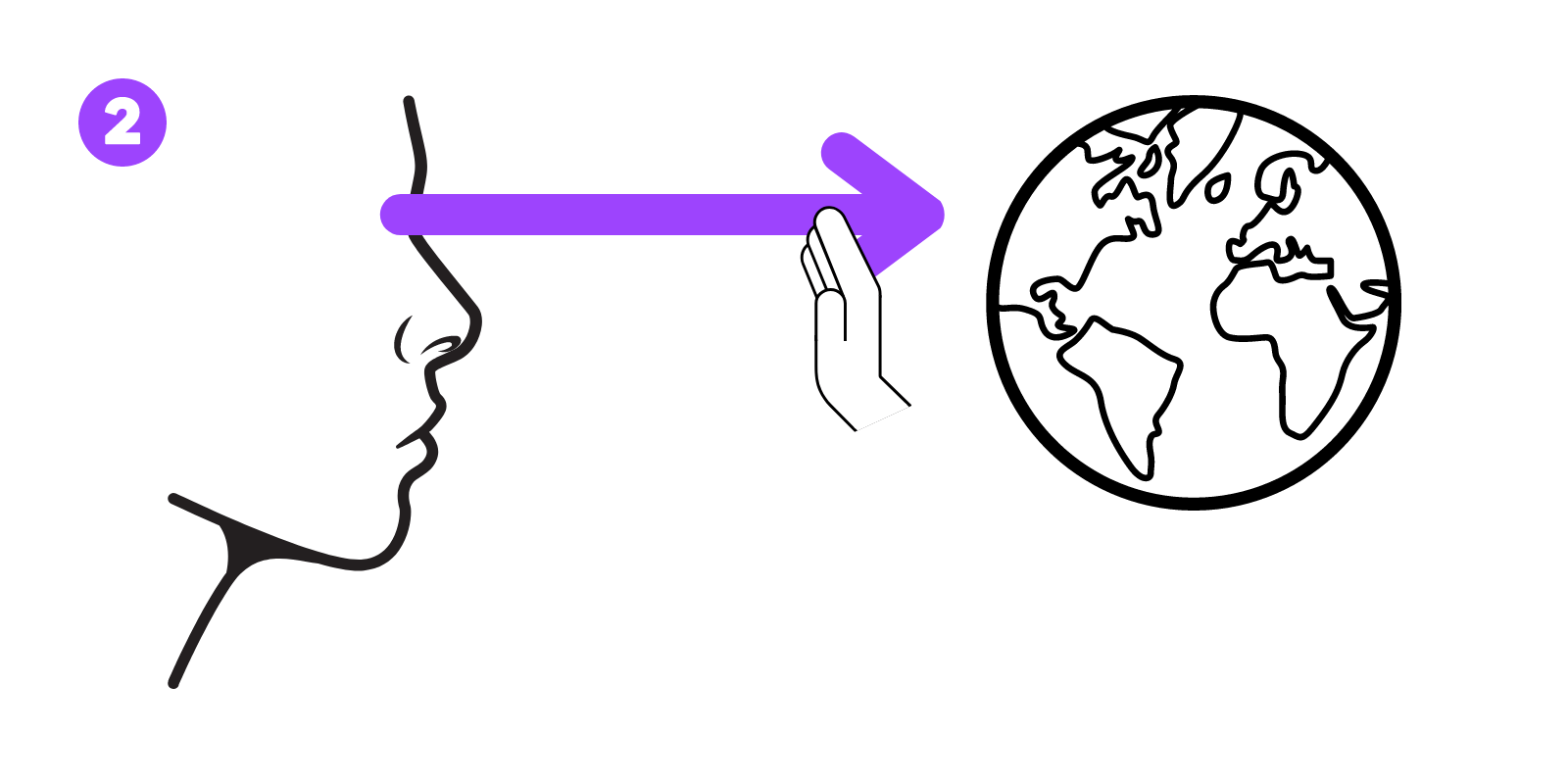 The same problem now looks smaller, and you can see over and even through it. You can see the rest of the world again, what a relief! But the problem is still very present, always within sight.

Of course, there is always a third option you can take, and that is to drop the problem altogether as soon as it arises: 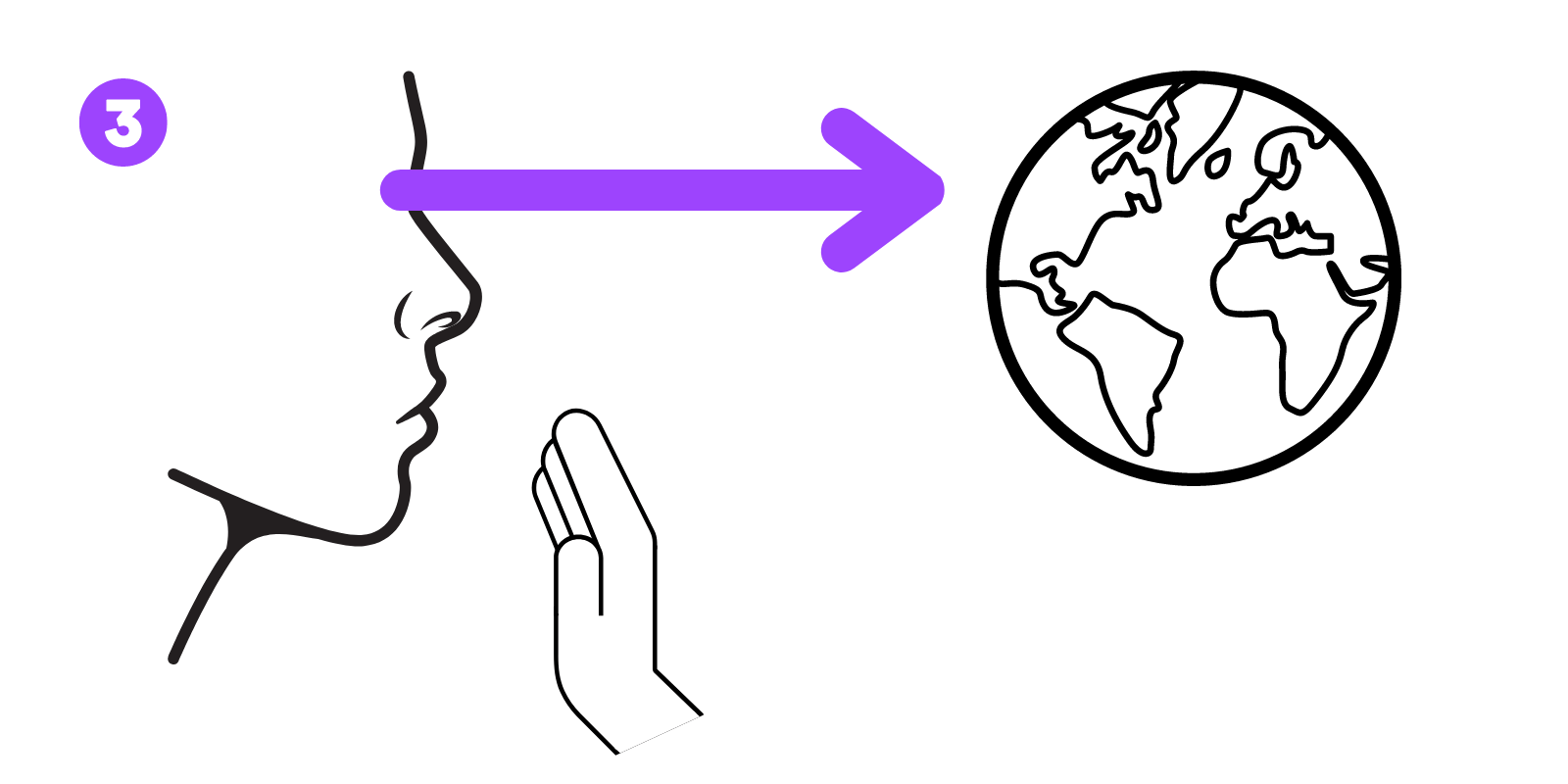 Now you don’t have to see through or over the problem anymore, and anywhere you turn, you have a clear line of sight. You are no longer blocked by the problem.

You are still aware that the problem is there, but how you look at the world is not defined by it. You can now deal with the problem without being constantly disturbed by it. And all this requires is awareness. 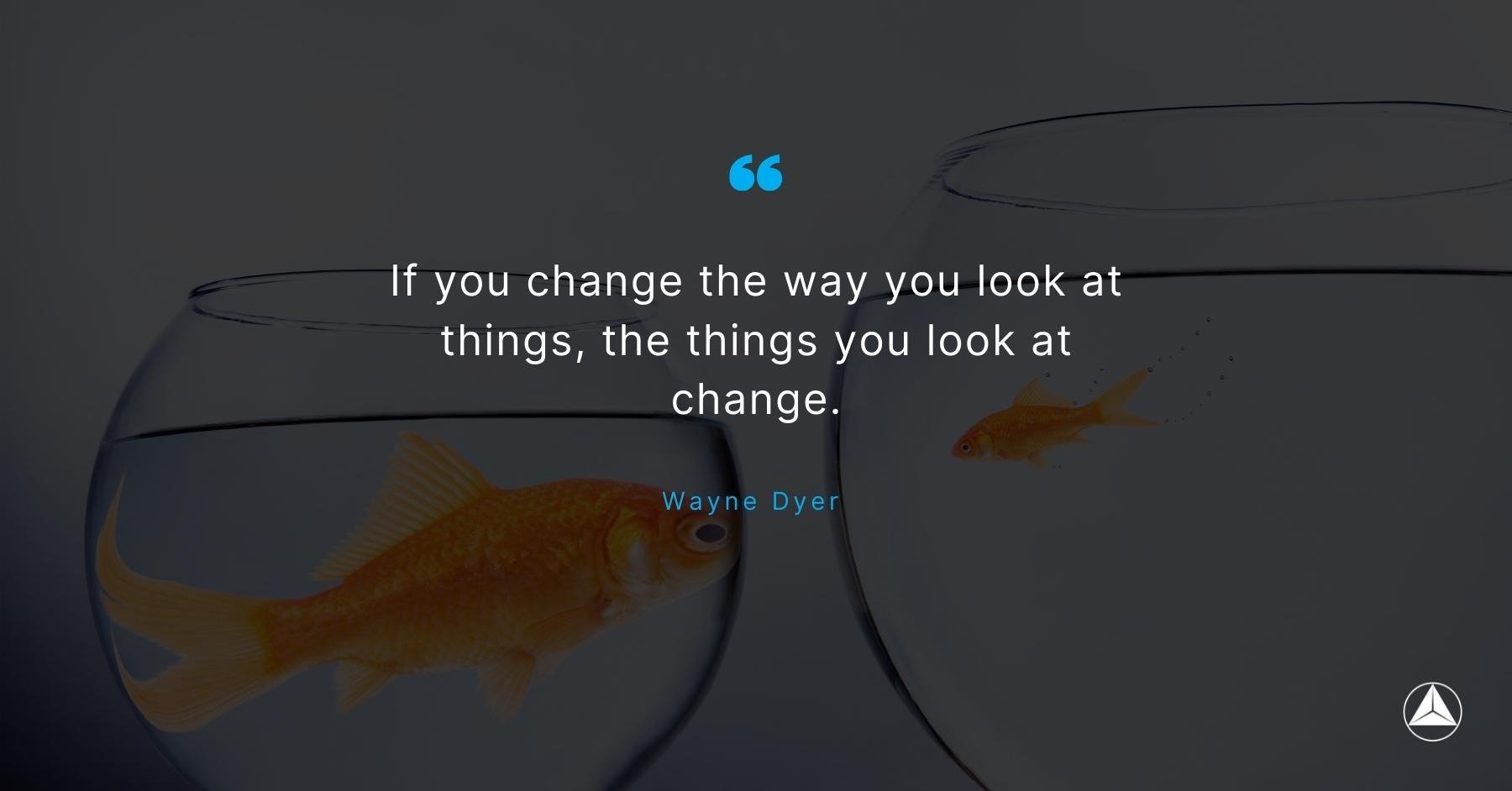 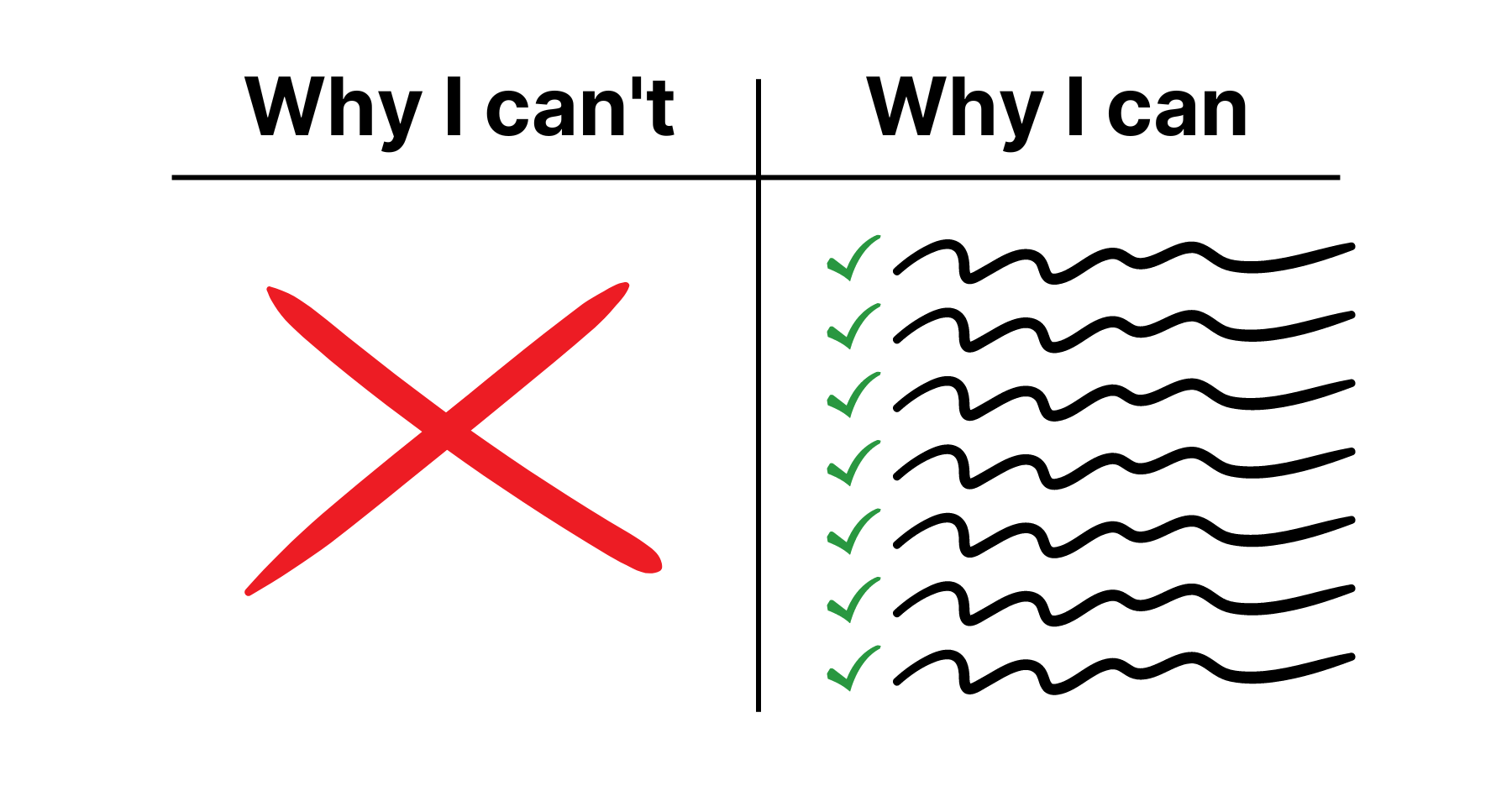 Thinking like this makes the challenges (which might exist, but are pulled out of proportion) appear to be much bigger than they are in reality, and the opportunities a lot smaller.

Reframing problems as opportunities for growth

You can also simply reframe every challenge that you encounter as an opportunity for growth. You have enormous untapped growth potential. Every obstacle you meet is a new chance to practice your resolve. 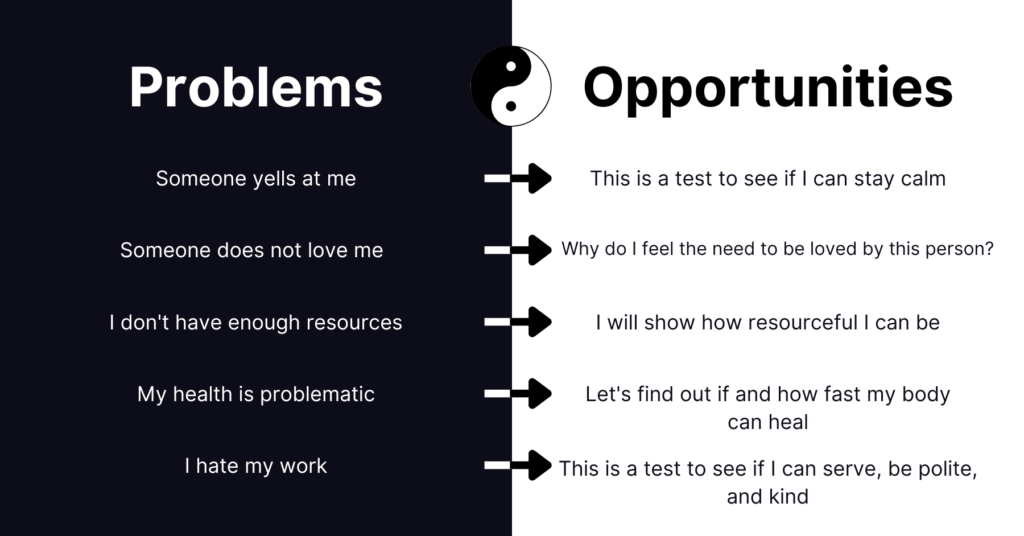 It is possible to honor every experience that you have that causes disturbance within you. Your discomfort shows you the way out! It shows you where you have work to do.

Cognitive reframing can be applied to pretty much any situation that you are facing. You can mentally reframe just about any dimension:

Cognitive reframing is a game you play with your mind

Cognitively reframing a problem or challenge that you are facing can be a very interesting exercise. Imagine you are trying to play a game with your own mind.

Your opponent’s objective is to try to make the situation seem as dire as possible. He probably has been scoring a lot of points.

Your objective is to reframe everything your opponent throws at you so that it becomes much less problematic or even insignificant. You can reframe any dimension you want. You score a point every time you feel a challenge shrink.

Try it. This works.

This can be a very useful Magic Move in your life if you are both willing and able to wield its power. 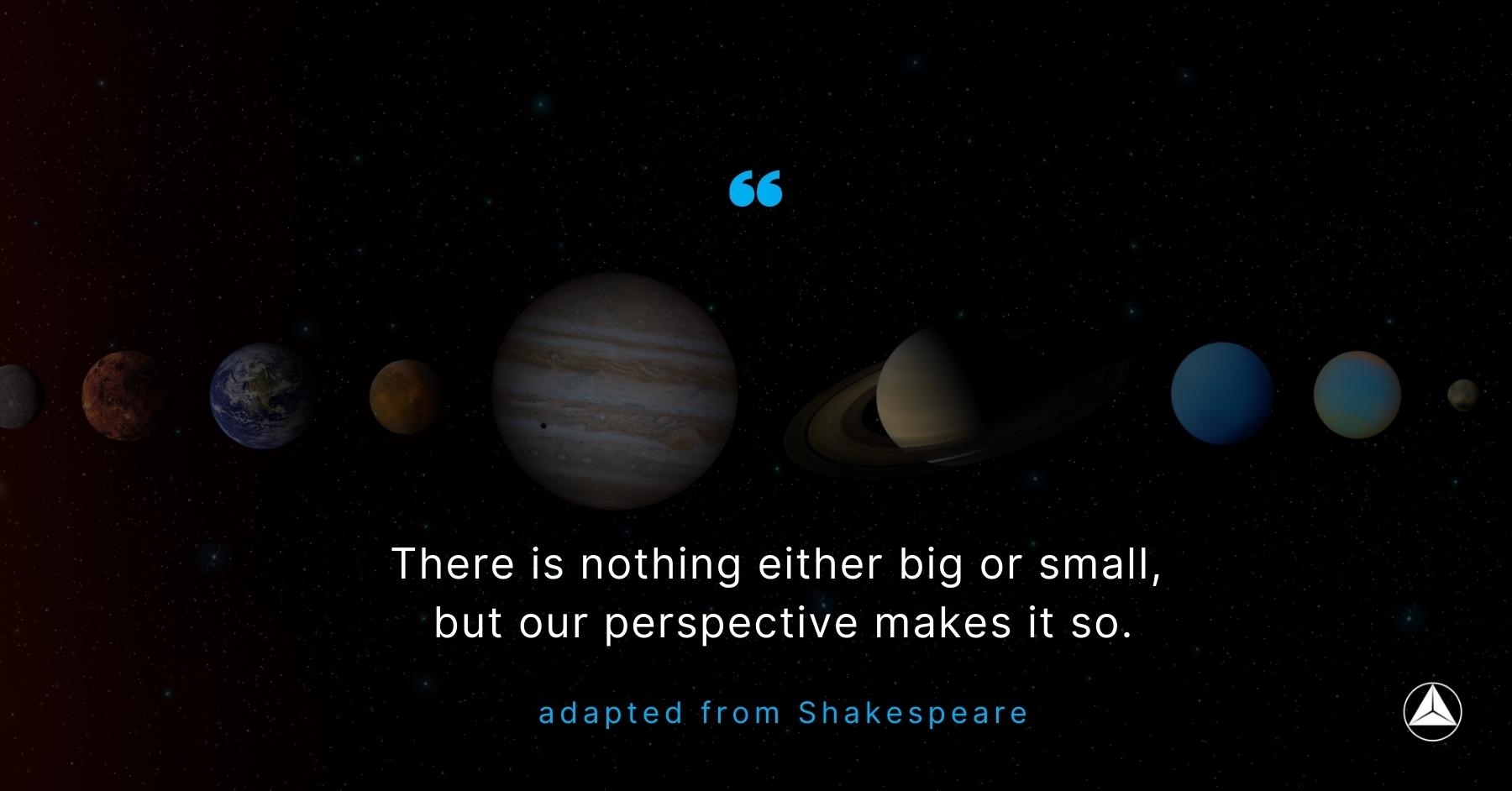 There is nothing either big or small, but our perspective makes it so.
– adapted from William Shakespeare 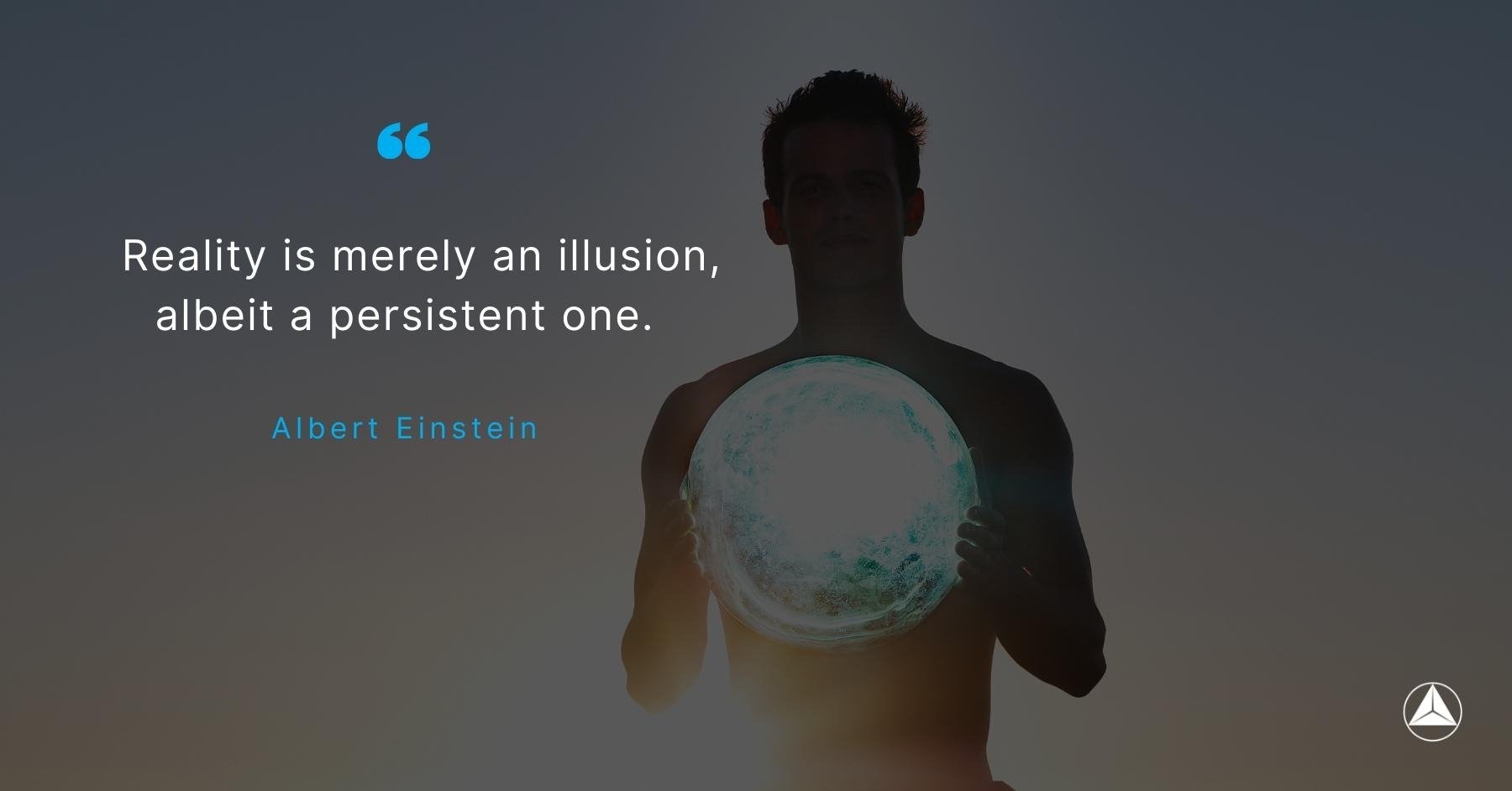 Reality is merely an illusion, albeit a persistent one.
Albert Einstein 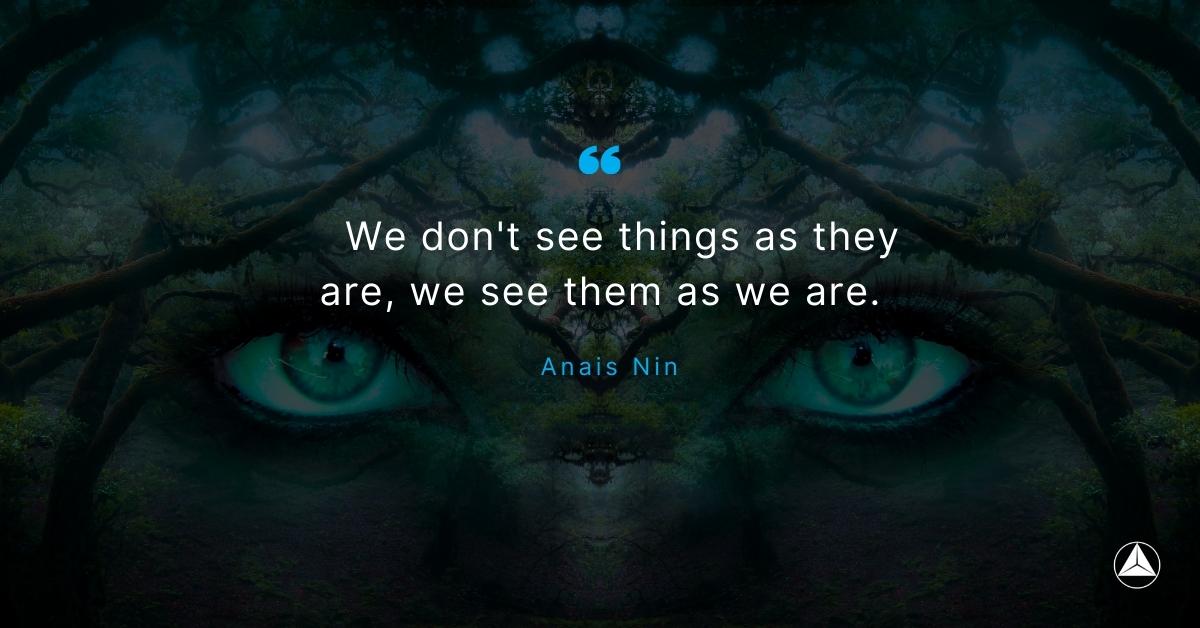 We don’t see things as they are, we see them as we are.
Anais Nin

If you don’t have an account, you can create one for free on this page. 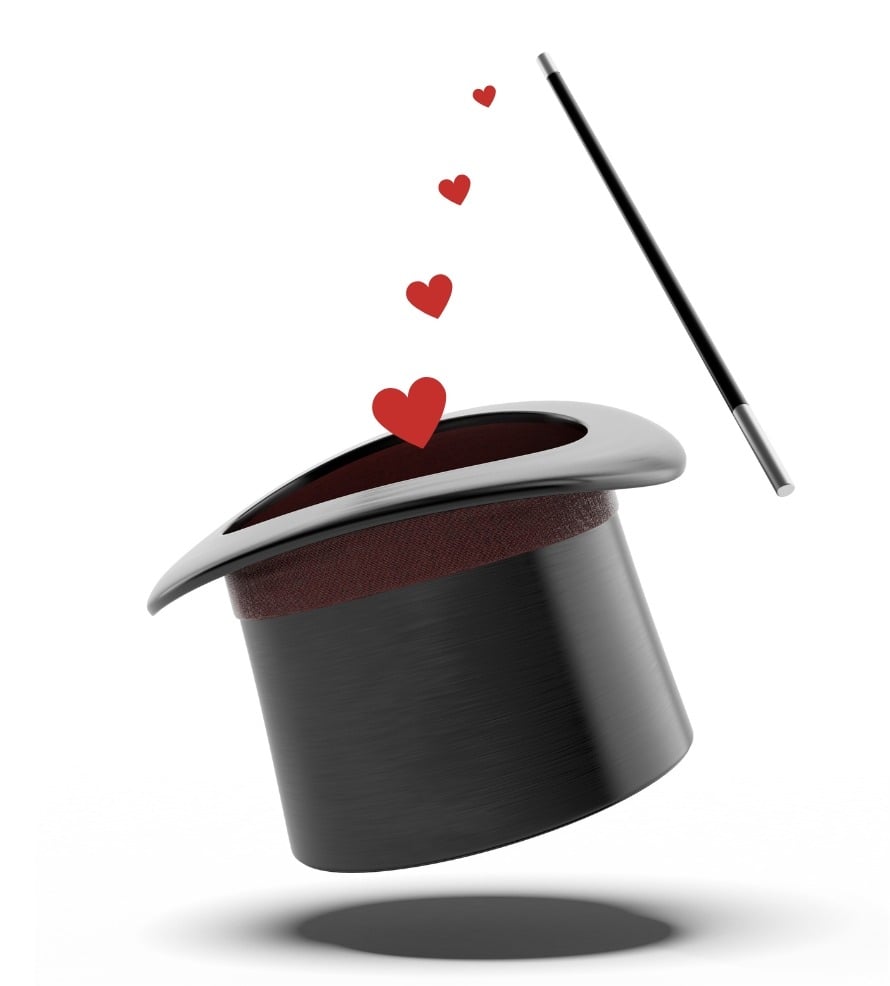